Let’s go to the next potentially treatable version, which is usually our cholesterol lipid. For those patients who aren’t at goal, who are at high risk, a moderate-intensity to high-intensity statin should be given, specifically in those patients with diabetes or those with high risk for future cardiovascular events. If my patients have had cardiovascular disease, we know the disease is present. If they’ve had a heart attack or a stroke, then they’ve got coronary artery disease [CAD], they’ve got peripheral artery disease [PAD], they might have had a limb event. In patients for whom we should have been doing those other things, but now they’ve still had the event, I’ve started to think about using what I’ll call the dual-pathway therapy: either a low-dose rivaroxaban plus aspirin, or I’ll come up with other ways to use specific agents. Often it’s the dual pathway, but if the patient just had an angioplasty or an MI [myocardial infarction], it may occasionally be dual-antiplatelet therapy [DAPT] to reduce their risk. Finally, for those patients with diabetes, we have an armamentarium of new agents, like SGLT2 inhibitors. That’s a lot of stuff to give a patient at once. I figure out what the patient’s highest-risk issues are and try to tackle those. Some patients have all those risk factors but may have some very specific ones you can home in on.

Marc P. Bonaca, MD, MPH: We’ve learned a lot about the risk profile of patients with peripheral artery disease and coronary artery disease, particularly in polyvascular disease. These are high-risk patients, and their risk profiles and their response to therapy differ depending on who they are. What I’ve learned about antithrombotic therapy and either long-term DAPT or long-term dual pathway with aspirin and rivaroxaban is that both have utility. I think of dual-antiplatelet therapy in high-risk patients with ACS [acute coronary syndrome] that we may continue long term. However, I see a lot of patients with chronic vascular disease who haven’t had a recent MI or who are on aspirin alone. In that setting, adding rivaroxaban has shown the greatest net benefit.

For example, for the polyvascular patient with PAD and CAD or the patient with high-risk chronic coronary disease who hasn’t had a recent MI or vascular intervention, the dual-pathway therapy has very good efficacy, the bleeding appears to be tolerable, and there’s a net benefit overall if you exclude patients who are very high bleeding risk. Patients with PAD, particularly those who don’t have coronary disease—about two-thirds of them—are very different. They’re very high risk. The risk is driven by limb outcomes, and in that setting it’s different from coronary disease.

We really have no data to support dual-antiplatelet therapy as a strategy. There was a trial called CASPER that looked at aspirin and clopidogrel vs aspirin alone in patients with PAD after intervention. There was no benefit but more bleeding. We also know that warfarin doesn’t work here. This becomes quite clear. The patient with PAD, particularly without CAD, who has undergone an intervention, really the only choice is aspirin and rivaroxaban vs aspirin alone. As an alternative, there are other agents that have been studied in the past like vorapaxar, but the most commonly available agent that is labeled for this chronic PAD patient population is aspirin and rivaroxaban.

In my practice, we need to do more for antithrombotic prevention with CAD and PAD and the combination of both. We need to be more thoughtful about risk even in patients who appear to be stable because we know that they’re not. They’re stably unstable, if you will. We have different strategies we can turn to that have shown efficacy: DAPT, aspirin and rivaroxaban, and for chronic PAD or CAD, I tend to reach for aspirin or rivaroxaban.

I like to individualize my approach to patient care and engage in and share decisions with my patients. So I tend to risk stratify. There are some very complicated risk-stratification algorithms. I tend not to do that. I use a more simplified approach. The first thing I think about when I see a patient in the clinic is their vascular risk. If they have symptomatic coronary disease, they’re at high risk. If you add something to that—like diabetes, heart failure, multivascular disease, CKD [chronic kidney disease]—then they’re very high risk. I know that patients with peripheral artery disease are high risk, particularly for adverse limb events, particularly if they have concomitant coronary disease. If they’ve ever had an intervention to their limbs or an amputation, then they’re at very high risk of limb outcomes. Those are the patients I really worry about.

I obviously want to think about bleeding risk. If they’re a high bleeding risk, I’m probably not going to add more intensive antithrombotic therapy. But if they’re not at high bleeding risk, I’ll usually add something. In the case of acute coronary syndrome, a patient who is tolerating DAPT may continue that long term. That’s reasonable. But most of these patients are on aspirin alone, so I’ll try to add a second agent. That tends to be low-dose rivaroxaban for polyvascular patients with PAD.

Cardiovascular Risk Management in Patients With DiabetesHeart Disease and Diabetes 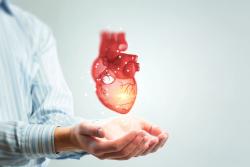 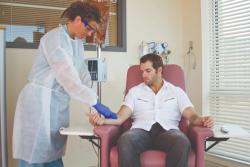 In Patients with Cancer and Diabetes, SGLT2 Inhibitors Could Provide Cardioprotection Against Anthracyclines