OSA and Dyslipidemia: Beyond the Obesity Factor

Obstructive sleep apnea negatively impacts lipid levels, greatly increasing risk for CV disease and independent of obesity, according to the largest analysis of the link to date.

Obstructive sleep apnea is more prevalent in patients with cardiovascular (CV) comorbidities and is historically linked with obesity. Metabolic dysfunction is suggested as an important factor in CV disease seen in patients with OSA and independent associations between OSA and impaired glycemia and insulin resistance are reported. Until now, the existence of an independent relationship between OSA and the development of dyslipidemia beyond the effects of obesity were not known. Results of the largest study to analyze the link are presented in this short slide show and could change the way you care for your patients with OSA.

Sleep Apnea and Dyslipidemia: What's the Link? Obstructive sleep apnea (OSA) and dyslipidemia are both linked to an increased risk for cardiovascular disease. The chronic hypoxia of OSA increases levels of systemic inflammation which may contribute to metabolic dysfunction, abdominal obesity, dyslipidemia. But does the strong link between OSA and obesity fully explain the impact of the former on increased CVD risk ? What’s the relationship between dyslipidemia, OSA beyond obesity?

European Sleep Apnea Data Study. This was a cross-sectional analysis and included 8592 participants who did not have hyperlipidemia or take lipid-lowering drugs; they were seen at 24 sleep centers in 18 European countries; final study results were adjusted for age, sex, BMI, waist-to-hip ratio, comorbidities, study site.

Dyslipidemia Worse as OSA Severity Increases. There was a dose response relationship between TC and ODI. Triglycerides and LDL oncentrations were better predicted by AHI than by ODI. HDL was significantly reduced in the highest AHI quartile. Lipid status was influenced by geographic location with the highest TC concentration recorded in Northern Europe. OSA severity was independently associated with cholesterol and TG concentrations. 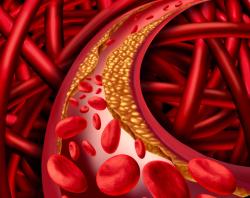 Statins Could Slow Progression of Arterial Stiffness in High-Risk Patients