Not Just for Europeans: Cardiovascular Benefits of Olive Oil Reported in US Patients

While the apparent cardiovascular benefits of olive oil have been proven in studies examining European populations, new research from a team of Harvard physicians is shedding light on impact in US patients.

A version of this article "Olive Oil Could Reduce Cardiovascular Disease in US Populations," appeared on our partner site HCPLive.

While the apparent cardiovascular benefits of olive oil have been proven in studies examining European populations, new research from a team of Harvard physicians is shedding light on impact in US patients.

The analysis, which analyzed more than 60k patients and included 24 years of follow-up, found higher olive oil intake was associated with lower risk of cardiovascular disease (CVD) and suggest using olive oil as a substitute for butter, mayonnaise, or margarine could lower risk of coronary heart disease (CHD) and CVD.

With previous data backing the notion increased consumption of olive oil was linked to lower risk of CVD in European populations, investigators sought to evaluate the associations in US patients-who consume less on average compared to their European counterparts. With this in mind, investigators designed the current study as an analysis of data from the Nurses’ Health Study II (NHS) and the Health Professionals Follow-up Study (HPFS).

Using 1990 as a start date, which was the first year olive oil consumption was included in questionnaires for both studies, investigators assessed cohorts of 61,181 women from NHS II and 31,797 men from the HPFS. All patients included in the study completed a food questionnaire every 4 years and were free of cancer, cardiovascular disease, and stroke at baseline.

For the purpose of analysis, the investigators categorized olive oil intake in 4 groups. Groups were defined as consuming olive oil never or less than once a month, 0-4.5 grams per day, greater than 4.5 grams but less than 7, and more than 7 grams per day.

Additionally, men and women with a higher intake of olive oil tended to have a greater intake of nuts, fruits, and vegetables. Patients in the highest category of mean consumption consumed more than 11 grams per day.

After adjusting for major diet and other factors, including smoking status, family history, and presence of diseases such as hypertension, results indicated those with higher olive oil intake (more than 7 grams per day) had 14% lower risk of CVD (pooled HR: 0.86; 95% CI, 0.79-0.94) and 18% lower risk of CHD (pooled HR: 0.82; 95% CI, 0.73-0.91). Conversely, there were no significant associations observed for total or ischemic stroke.

In an editorial comment published in JACC, highlight the results of the study and suggest, despite relatively low use of olive oil, it should be promoted for CVD prevention.

“The findings of the present study also suggest that the replacement of more saturated fats, such as butter, margarine, mayonnaise, and dairy fat, with olive oil entails a lower CVD risk. This is a further argument for promoting the use of olive oil in place of less healthy fats in the U.S. population,” wrote Ramon Estruch, MD, PhD, of the Instituto de Salud Carlos III, and colleagues, in the editorial.

This study, “Olive Oil Consumption and Cardiovascular Risk in U.S. Adults,” was published online in JACC.

Understanding Aficamten and the SEQUOIA-HCM Design, with Martin Maron, MD 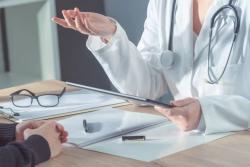