Mild chronic hypertension in pregnancy: To treat or not to treat?

Dr. Lockwood, Editor-in-Chief, is Dean of the Morsani College of Medicine and Senior Vice President of USF Health, University of South Florida, Tampa. He can be reached at DrLockwood@ubm.com.

The debate over which approach most benefits mother and baby still rages.

Dr Lockwood, Editor-in-Chief, is Dean of the Morsani College of Medicine and Senior Vice President of USF Health, University of South Florida, Tampa.

Chronic hypertension in pregnant women continues to increase in the United States, most likely because of delayed childbearing and the obesity epidemic. Twenty years ago chronic hypertension complicated less than 1% of gestations. In the period 2007–2008 this rate grew to 1.5%, with the rate accelerating after 2001.1 Pregnancy outcomes of such pregnancies are, of course, concerning.

A recent secondary analysis of 759 women with chronic hypertension diagnosed before 20 weeks’ gestation and enrolled in the NICHD Maternal-Fetal Medicine Units Network’s high-risk aspirin preeclampsia prevention trial suggests just how concerning.2 The authors divided these women into 3 categories based on pre-enrollment blood pressures: < 140/90, 140–150/90-99, and 151–159/100–109 mmHg.

Interestingly, in this study significantly more women whose initial blood pressures were < 140/90 mmHg at enrollment had started antihypertensive therapy before pregnancy than those in the 140–150/90–99 and 151–159/100–109 mmHg pre-enrollment blood pressure categories (72.6% vs 55.2% and 48.3%, respectively, P < 0.001). These findings led the authors to speculate that better control of blood pressure among pregnant patients with mild chronic hypertension could improve outcomes.

To treat or not to treat?

The debate over whether pregnant patients with mild chronic hypertension should be treated has raged since I was an intern. An early randomized trial by Sibai and associates comparing treatment of mild chronic hypertension with methyldopa or labetalol versus no drug showed that while treatment lowered maternal blood pressure, it did not affect the prevalence of superimposed preeclampsia, abruption, or preterm delivery nor alter birth weight, rates of fetal growth restriction, or neonatal head circumference.3

In contrast, a small randomized trial of atenolol versus placebo in 33 such patients demonstrated a birth weight of nearly a kilogram lower (2620 vs 3530 g; -910 g; 95% CI: 440–1380).4 By 2000 the Cochrane Database reported on 27 trials, 14 comparing beta-blockers with placebo or no beta blocker, and noted that although such agents decreased the risk of severe hypertension (relative risk (RR) of 0.37; 95% CI 0.26–0.53) they also appeared to be associated with an increase in SGA infants (RR of 1.34; 95% CI 1.01–1.79).5 The report also concluded that beta-blockers were comparable to methyldopa in maternal and perinatal outcomes.

The variable and/or ambivalent outcomes of such studies have led the American College of Obstetricians and Gynecologists to consistently opine against starting or continuing antihypertensives for mild chronic hypertension in pregnancy.6 Thus, some 15 years later, we are still asking the question of whether to aggressively manage blood pressures in pregnant patients with mild chronic hypertension. A recent large study provides new insights into this controversy but also raises additional questions.

The primary endpoint of interest was either pregnancy loss or so-called “high-level” neonatal care for > 48 hours, while the secondary endpoint was occurrence of serious maternal complications up to 6 weeks postpartum. After exclusions and drop-outs there were 493 women and fetuses available for analysis in the less-tight control group and 488 in the tight control group.

Adherence to the blood pressure goals occurred in three-quarters of patients and, as expected, antihypertensive medications were taken by fewer of the less-tight than tight control women (73.4% vs 92.6%); about 70% of those treated received labetalol. There were no differences in occurrence of the primary endpoint between the less-tight and tight control groups (31.4% vs 30.7%; adj OR of 1.02; 95% CI: 0.77–1.35) nor in rates of serious maternal complications (3.7% vs 2.0%; adj OR of 1.74; 95% CI: 0.79–3.84). There were also no statistical or clinically meaningful differences in stillbirth rates or in mean gestational age at delivery. Of note was a trend toward fewer infants with birth weights < 10th percentile in the less-tight versus tight control group (16.1% vs 19.7; adj OR of 0.78; 95% CI: 0.56–1.08), although the study was not adequately powered to rule out such a difference.

While the study has its limitations, including the blending of true chronic with gestational hypertensive patients and inconsistent use of a single therapeutic agent, it does strongly suggest that modestly better maternal outcomes accrue tighter treatment of chronic hypertension, although the impact of such therapy on fetal growth remains unsettled.

As a practical matter it seems reasonable to suggest that patients who are well controlled on antihypertensives prior to pregnancy should remain on their therapy once pregnant if their diastolic blood pressures remain at or above 85 mmHg. In addition, starting treatment of pregnant patients with blood pressures above 100 mmHg does not appear to be associated with major adverse fetal risks and may improve maternal outcomes.

However, what is not clear is just how low (85, 90, or 95 mmHg) maternal diastolic blood pressures should be maintained to optimize maternal well-being without jeopardizing fetal well-being. 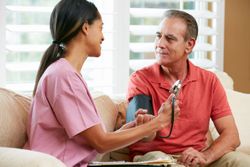