A 42-year-old man visited the ED complaining of acute onset of dizziness, heart palpitations, and a racing heartbeat. He's been working overtime and drinking caffeinated energy drinks to stay awake. He said he had multiple episodes of faintness over a short period of time. Can you diagnose this patient?

A 42-year-old man went to the ED complaining of acute onset of dizziness, heart palpitations, and a racing heartbeat. He's been working overtime at two jobs and has been drinking multiple energy drinks with high amounts of caffeine to stay awake. He reported multiple episodes of faintness over a short period of time and sought treatment. An ECG showed a wide QRS complex.

Can you diagnose this patient? Use the differential builder in VisualDx to help you make a selection.

The correct answer is (A) ventricular tachycardia.

A cardiac arrhythmia originating from the ventricles. May be asymptomatic or may present with dizziness, palpitations, chest pain, shortness of breath, syncope, or sudden cardiac arrest. Characterized by a wide QRS complex (duration >120 msec), although supraventricular tachyarrhythmias may also exhibit a wide QRS complex when abnormal intracardiac conduction (aberrancy) is present. Distinction between these arrhythmias may be helpful for long-term treatment, although it may not be necessary for treatment of an unstable patient.

Ventricular tachycardia (VT) may be classified as:

VT is most commonly observed in patients with underlying structural cardiac abnormalities (including coronary artery disease, hypertrophic cardiomyopathy, dilated cardiomyopathy, and ion channel mutations such as Brugada syndrome and long QT syndrome), although some patients will present with idiopathic VT, which is defined by occurrence of VT in a structurally normal heart.

Treatment varies depending on the presenting symptoms and hemodynamic stability. Options may include cardiopulmonary resuscitation, electrical defibrillation, or use of antiarrhythmic drugs (eg, amiodarone). Patients with a history of life-threatening or recurrent VT will often undergo radiofrequency catheter ablation and/or placement of an implantable cardioverter defibrillator.

To learn more about this diagnosis and for ICD10 codes, visit VisualDx. 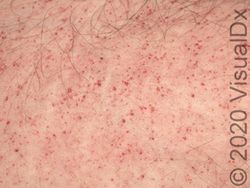 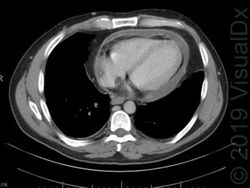