ECG Challenge: It's the Level of the Block that Counts

This 83-year-old man is treated only for hypertension and says he "feels like Tarzan." The routine ECG says otherwise.

An 83-year-old man with hypertension but who is otherwise healthy and very active for his age presents to your office for routine follow-up. He just returned from a trip out of the county where he was walking several miles per day and states he “feels like Tarzan.” His vitals are normal except his pulse is noted to be 45/beats min. He takes carvedilol 25 mg twice daily and losartan-HCTZ 40/25 mg once daily for hypertension. ECG is obtained and shown below (Figure 1a).

The ECG shows sinus rhythm at ~80 beats/min with 2:1 AV block for an effective ventricular rate of ~40 bpm. A cursory look at the rhythm strip lead II could lead one to identify this as marked sinus bradycardia. But note in V1 and V2 (Figure 1b) that there are two clear p-waves (red lines) in between the QRS complexes (blue lines), with the sinus rate occurring at twice the ventricular rate.

What is the best next step in patient management?

It is not possible to discern based on this single surface ECG if we are dealing with a Mobitz I (proximal AV nodal) versus Mobitz II (distal AV nodal) block. Determining the level of block is critical because asymptomatic Mobitz I or Wenkebach AV block is benign whereas Mobitz II AV block can progress to complete heart block and requires pacemaker implantation.

Characteristics that differentiate this as proximal AV block include the narrow QRS, the absence of symptoms, and the patient’s high dose carvedilol as a possible causative agent. A simple non-invasive method to further demonstrate proximal vs distal AV block is to increase the sinus rate with exercise while performing continuous ECG monitoring and note whether AV conduction improves. A stress treadmill ECG is one option and having the patient perform leg lifts while supine and hooked up to telemetry or a rhythm strip is also sufficient.

Figure 2 below shows a sample from leads V1 and V2 of the patient’s stress ECG at rest (left) and then 4 minutes into a standard Bruce exercise protocol (right).

The baseline (rest, left) rhythm strip again shows 2:1 AV block with two p-waves in between each QRS complex while with exercise this becomes a 1:1 p-wave to QRS complex relationship. The presumed PR interval in the exercise strip, however, is very long (> 400 msec), and inspection of lead V2 shows it is inscribed before the T-wave, therefore the rhythm with exercise likely is an accelerated junctional rhythm with retrograde p-waves rather than 1:1 antegrade AV node conduction.

Have we demonstrated a degree of nodal block significant enough to require pacemaker implantation?

The exercise rhythm strip suggests intact retrograde AV node conduction but does not clearly reveal the status of antegrade AV node conduction. Reversible causes for AV nodal block must be addressed before pacemaker implantation is considered. Therefore the patient’s carvedilol was stopped and reassessment of AV node conduction was performed about 5 days after the initial visit with a repeat resting and stress ECG. Findings were essentially unchanged from the rhythm strips in the previous figures. The patient in the interim remained entirely asymptomatic and expressed an understandable reluctance to consider permanent pacemaker implantation.

Based on this new iformation, is pacemaker implantation now indicated?

There still is no strict indication for pacemaker implantation primarily because the patient remains asymptomatic and also because the level of block has not been shown to be below the level of the AV node. The most recent (2012) ACC/AHA/HRS Guidelines for Device-based Therapy of Cardiac Rhythm Abnormalities stress that:

Permanent pacemaker implantation is not indicated for asymptomatic type I second-degree AV block at the supra-His (AV node) level or that which is not known to be intra- or infra-Hisian.

The most accurate method to confirm the level of AV block is minimally invasive electrophysiologic (EP) evaluation of AV nodal physiology. This is performed by advancing a diagnostic pacing/mapping electrode catheter to the level of the AV node-HIS bundle region at the superior aspect of the tricuspid valve. Baseline conduction properties of the AV node and HIS bundle are then measured (in Figure 3 below A, H and V represent depolarization of the atrium, HIS bundle, and ventricle, respectively).

Advanced distal block is suggested if prolonged HIS to ventricular conduction times are noted (typically > 65 msec). An atrial pacing protocol at increasing rates is then performed with close evaluation of conduction to the ventricles to determine if AV block occurs below the level of the HIS (after the HIS signal) which would again demonstrate pathologic rather than physiologic AV block (before the HIS signal). Pathologic second-degree AV block at intra- or infra-His levels found on EP study is a Class IIB indication for pacemaker implantation in asymptomatic patients.

The patient underwent diagnostic EP study as described above. Baseline H-V times were normal and atrial pacing performed at increasing rates demonstrated AV block occurring before the HIS bundle was activated. These conduction study findings were most consistent with type I second-degree AV block occurring at the supra-His (AV node) level without indication for pacemaker implantation. The patient subsequently underwent 4-week ambulatory rhythm monitoring that did not show evidence of high grade sinus or AV node dysfunction and has been happy with the deferral of permanent pacemaker implantation. 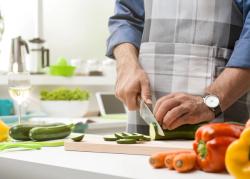 DASH Diet Could Prevent 25,000+ Cardiovascular Events in those with Stage 1 Hypertension