Deepak Bhatt, MD, MPH: There are a lot of important points you made there. And before getting into the trials, I just want to make sure for the audience everything is really clear. Manesh Patel and I were chatting right before the program about some confusion that’s out there. For dual pathway inhibitions specifically, we were talking about low-dose aspirin, which in the U.S. would be 81 milligrams, but other parts of the world might be somewhere between 75 and 100 milligrams of daily aspirin. And then specifically rivaroxaban [Xarelto], and then specifically the 2.5-milligram dose given twice a day. But now apixaban [Eliquis] also comes in 2.5 milligrams a day. Just so it’s not to confuse the audience, those aren’t interchangeable, but why is it they’re not interchangeable?

Manesh Patel, MD: It’s really important. And I think one of the things going back to my sort of what we just heard is that I try to simplify for patients, and for my own thinking, about the pothole and the highway. But if we go back to medical school and try to remember that coagulation pathway in cascade, thrombin becomes really important for hemostasis to stop bleeding. Body wouldn’t have a pathway if you didn’t need it. When you need to stop bleeding, thrombin is one of the key factors after tissue factor to stop that bleeding, it then activates platelets to help stop the bleeding. But that then sometimes, when it’s a Barr [Epstein-Barr virus-associated venous thromboembolism] [ph], leads to thrombosis. We’re always about this sort of justice thing about hemostasis versus thrombosis. What we’ve learned through many studies is the dose of that Xa [Factor Xa inhibitor] that prevents thrombin generation is really critical. What you hear Marc Bonaca say, and I just want to make sure the audience gets that, is that 2.5 twice daily of rivaroxaban is a much smaller dose than a 20-milligram dose or the 15-milligram dose for atrial fibrillation.

Now, I’ll remind everyone that, of course, apixaban works well too and many uses that. The A-fib [atrial fibrillation] dose is 5 milligrams. I like to say there’s 1 dose of apixaban, it’s 5 milligrams, 2.5 in the trial. For atrial fibrillation was only in 400 patients. It’s overused in the United States, I would say, because of A-fib bleeding risk, but that’s still 10 times the dose. That was maybe what you would be trying to study if you tried to use it for vascular. Thus, they’re not only not interchangeable, we’ve seen in other studies where if you just use that dose, ACS [acute coronary syndrome], for example, with apixaban, it can lead to intracranial hemorrhage in the APPRAISE-2 [Apixaban for Prevention of Acute Ischemic Events 2] trial and stop the trial. If you use the wrong dose here, the wrong agent, you can actually put your patient with significant risk. Now, like everyone else, there’s a lot of stuff to remember. It’s pretty hard to be like, “Manesh, how am I supposed to…” You’re right. Thus, get an agent or 2 that you understand and know the dosing. Don’t try to do 7. I get that. The first message is, when do I use DAPT, or dual antiplatelet therapy? When do I stop that? And then, if I’m going to use dual pathway, which has a big benefit, we’re going to talk about the trials, then make sure you use the right drug at the right dose.

Deepak Bhatt, MD, MPH: I think those are really critical points that you’ve made to know the dose and the drug and the indication. And if you can’t remember, that’s OK. I look up the package, consult your local pharmacist. They’re often a great resource in terms of thinking about the NOACs [non-vitamin K antagonist oral anticoagulants]or the DOACs [direct oral anticoagulants] and kidney functioning, and you dose this, you dose that. There are a lot of factors. It’s hard to, I think, keep it all in the brain all at once. And I think some dosing errors are due to sort of memory errors. Some are due to just underdosing, which is what you were talking about, where apixaban 2.5 BID [twice daily] is often used where the patient should get 5 BID of apixaban for atrial fibrillation, but just the doctors worry about bleeding, so they underdose them. Hence, they’re not getting the benefit that they would’ve gotten by getting the appropriate dose. Thus, whichever indication, whichever NOACor DOAC you’re wanting to use, make sure it’s the right dose and right medication.

Manesh Patel, MD: And I just had one more thing, sorry, Deepak, to say. There’s only 1 DOAC that has a vascular indication. And thus, I think, if you’re thinking about using a DOAC for the highway problem, broadly long-term, then there’s only 1. It’s rivaroxaban, 2.5 BID. And I wish there were others, don’t get me wrong, but then you’d have to study them and get the right dose. You’d have a choice for your patients. It’s just that this is the only 1 at that dose that we know.

Deepak Bhatt, MD, MPH: I think that’s key. Most doctors like to talk about things as class effects, and I think for atrial fibrillation, there are great data for apixaban, great data for rivaroxaban, dabigatran [Pradaxa] as well, and edoxaban band also to an extent. Thus, I think, that’s a different story, but you’re right. For vascular indications, we’re really talking about a specific NOAC or DOAC, the rivaroxaban and a specific dose, 2.5, and a specific dosing regimen, 2.5 BID.

Manesh Patel, MD: It could be a class effect. It’s just that we don’t know the dose for the other agents.

Deepak Bhatt, MD, MPH: Right. I was lucky that I was involved with the leadership of both APPRAISE-2, which is the trial you were referring to with full dose of apixaban and acute coronary syndrome patients largely added to dual antiplatelet therapy. There was some aspirin monotherapy, but also the ATLAS [Antiretroviral Therapy as Long Acting Suppression] trial, which maybe, just to explicitly tell the audience was an ACS trial as well. And that was using the 2.5-milligram BID dose, and it was totally different results. With ATLAS-2, there was a mortality reduction with the 2.5 BID. With APPRAISE-2, the DSMB [Data and Safety Monitoring Board] said, “Stop the trial. Stop.” There are young folks that are having intracranial and fatal bleeds even. It’s not just frail 80-year-old patients that are having these bleeding complications. Also, obese 50-year-olds are having it. We ought to stop this trial. Hence, the dose matters. And I would’ve liked another trial of apixaban, maybe at some 1.2-, 5-dose or something, but the reality is that trial has never been done, so it would be inappropriate to try to extrapolate that. 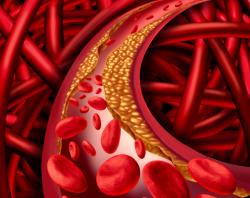